Can’t you just hear Mick Jagger’s rousing voice now? Of course he was only twenty years old when he uttered these famous words; plus, he was referring to the inevitability that a lover would return to him. But in essence, time has been on Mick’s side, hasn’t it? How else could he take part in the production of one-hundred singles, over two dozen studio albums, various compilations and live albums, and not to mention the fathering of an inexplicable amount of offspring? Besides, fifty years later and Mick (along with the Stones) are still touring, performing, and rocking out.

Pretty impressive. Not going to lie. 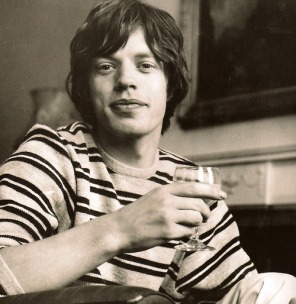 But this isn’t about the prowess of The British Invasion. It’s about the life of the average writer—particularly those writers leading a presumed double life, i.e. day jobs, parenthood, general housekeeping—and his or her capricious relationship with time.

Over the weekend I went to Sears to pick up my newly repaired watch. As I forked over the fifteen dollars it hit me: I’m actually paying someone to provide me with yet, another device to tell time. There’s a clock in every classroom at the college where I teach. My husband and I have two alarm clocks in our bedroom. Downstairs in my kitchen, I sometimes feel cross-eyed staring at the double digital imprints on the stove and microwave. Our cable box tells the time. If I turn on the television and go to the preview channel, I can see the exact hour, minute, and second of the day. Sometimes TD Bank even offers a courtesy update in between commercials. My car shows the time. This laptop I’m currently writing on shows the time. My iPhone has clock app. If interested, I can view the time in the Philippines.

It’s no wonder so many people I know (myself included) are near-lunatics. The constant ticking and tocking and shifting numbers are forever reminding us of the things we haven’t yet done, of the things we’re supposed to be doing. As a writer—particularly one who aspires towards publication—this obsession with time has had some pretty negative impacts on my psyche.

Many of us have been asked this question: what is your biggest fear when it comes to writing? Some obvious answers might be “failure,” “success,” or “failure to reach success,” or even, “successfully reaching failure.” Others might say, “Never being good enough,” and “not finding an agent,” etc.

In hindsight, my personal writing fears have always been rooted in Time. Not finishing in time. Not finding the time [to write]. Or worse, not making time to write—in essence, wasting time. Wasting precious, valuable time. Not using enough time. The list goes on.

Consequently, this fear often spirals out of control into some sort of wicked slippery slope. The ‘what if’s’ run rampant and in a span of two minutes “time” I wind up feeling depleted, doomed, and hopeless.

How could that author finish an entire, polished manuscript in only nine months? Well maybe if I had all day every day to write then I would too. Oh my God, I’m thirty years old and I have nothing to show for it. The publishing industry is changing faster than I can write and what if by the time I’m finished with my book no one is reading anymore? Everyone is just watching cat videos on YouTube? What’s the point of investing all this energy into something people don’t even do anymore?!

Every time I open my inbox I get flooded with offers—webinars on the ‘craft,’ books on snagging an agent, methods for improving characterization, tips to enhance social media! At this rate, it’ll take me a decade to master all this stuff, never mind actually write a novel…what if I compose an amazing story, written brilliantly, but I get rejected because I’m lagging in social media? What comes first? Chicken? Egg?

Not to mention with all these other things on the horizon—buying a new house, selling this house, and starting a family, what if I lose track of my goals? I’ll end up putting it off and putting it off and next thing I know I’ll wake up one day and I’ll be seventy years old and no one will be reading anymore because the world will have gone to s**t and in fact no one will even be talking to each other anymore, let alone reading, we’ll have the attention spans of fish and…and…and…it’ll all be lost, and I’ll say, Man! I wish I had spent more time on this when I was thirty….

But at least I’m discovering that this is a counterproductive way of thinking. In all the time I spend seething about my lack of time, I could be well, doing something about it.

I’ve discovered some “truths” to help this issue of time when it comes to writing.

1. The writing industry IS competitive. But that’s a good sign, because it means that there are thousands upon thousands (probably millions, in fact) of literary types out there that want to keep this craft alive. And where there are writers, there are readers.
2. Some of the greatest novels I’ve ever read took the author years to write.
3. As long as I’m doing something towards my writing goals each day I’m making good use of my time. Even if it’s simply subscribing to a helpful blog.
4. It helps tremendously to ask myself where I was in the writing process one year ago today. This shows me how far I’ve truly come

Then of course there’s Mick Jagger. You could always reflect on that guy’s life. Because, be it as it may, The Rolling Stones know how to make good use of time.

I’ll leave you with some of my favorite quotes on “Time”:

“All that really belongs to us is time; even he who has nothing else has that.”
-Baltasar Gracian

“An unhurried sense of time is in itself a form of wealth.”
-Bonnie Friedman

“Calendars are for careful people, not passionate ones.”
-Chuck Sigars

Filed under Why We Write, Writing Fears, Writing Process