As if Shakespeare wasn’t busy enough churning out histories, tragedies, and comedies by the dozen, he was also fiercely composing perfectly rhymed, tightly structured, yet deeply meaningful sonnets—154 throughout his lifetime to be exact.

Make no mistake that this is no easy task; syllable counting, rhyme scheming, and line length doesn’t always leave room for free-flowing insight. But yet, it’s The Bard, and he manages not to just pull it off, but pull it off masterfully.

Have you ever tried writing a sonnet? I have and it wasn’t pretty.

In my most recent Old School Sunday posts, I’ve been aiming to prove Shakespeare’s eternal, timeless relevance—both then and now. His ideas, his notions, come directly from the roots of human nature, and despite the many complexities and nuances of his stories and poems a very simple moral will present itself. A moral in which we all—despite time and experience—can identify.

There a various types of sonnets, which you can read about here, but the basic idea is a structured poem with stringent rules; again, like mentioned above containing a certain number of syllables (iambic pentameter), lines, and rhyme schemes. It’s an antiquated tradition that’s mainly been squashed by most of the free verse poetry (though of course even that still has its own structure) we see today.

The English (or Shakespearian) sonnet consists of fourteen lines total. Three quatrains of four lines and one two-line couplet at the end, making the rhyme scheme as follows:

“Shall I compare thee to a summer’s day?”

The sonnet below is fairly well known, but it is my absolute favorite of the The Bard’s poetry for reasons I will explain later on. Read carefully though—this is not your average love poem:

Coral is far more red than her lips’ red—

If snow be white, why then her breasts are dun—

If hairs be wires, black wires grow on her head:

I have seen roses damasked, red and white,

But no such roses I see in her cheeks,

And in some perfumes is there more delight

Than in the breath that from my mistress reeks.

I love to hear her speak, yet well I know

I grant I never saw a goddess go;

My mistress when she walks treads on the ground.

And yet by heav’n I think my love as rare

As any she belied with false compare.

*Note: I remember from one of my college poetry classes that often, the two line couplet at the end of sonnets often seeks to disprove the preceding twelve lines. This is certainly true in Sonnet 130.

Our whole lives we hear the old adages, “No one is perfect,” or “It’s what lies on the inside that counts,” etc.

Shakespeare, it appears, beat us to this notion with Sonnet 130. In contrast to the over-romancized love poetry of his day, which often painted the object of affection as a goddess-like being, Shakespeare brought it down to the earth by saying, essentially: “Let’s be honest here. Her breath stinks, her hair’s bad, she’s tone deaf, and she’s pale. But hey, I love her anyway. There’s no one else in the world like my mistress.”

It’s a concept we sometimes tend to forget. We still look for that flawless specimen. Or worse, we expect our partners to be flawless.  It’s an impossibility that no one on this planet will ever realize. Shakespeare knew it, and so should we. It may, after all, be the ticket to true love.

Ah, Othello; the original bi-racial love story. It’s true if you think about it: take any topic in the current world—controversial or not—and there’s a good chance Shakespeare explored it in one of his plays.

I’ve studied Othello as a student, and taught it as a teacher, but each time I read it, I discover something I didn’t previously catch. The story is just that complex.

In a nutshell, Othello is a “Moor” (from Northern Africa) living in Venice. He is, however, also a war hero. Othello is in love with Desdemona (hence, the bi-racial element). At the beginning of the play, Othello has just given the position of lieutenant to a man named Michael Cassio, instead of Iago, a man with evil intentions.

Iago attempts to get Desdemona’s father riled up about her relationship with Othello, but his plan fails. Iago’s next course of action is to frame Michael Cassio and Desdemona as lovers…playing on Othello’s (or every man who’s ever lived) greatest weakness: jealously.

In many of my Old School Sunday posts I like to reveal more obscure lines that are tucked away in the pages of great literature. This line is not so obscure. But nonetheless, in my personal copy of the play I underlined the short quotation numerous times and with three different color pens. It’s important. So here it is.

Ironically enough Iago utters these lines in an attempt to play Othello, when in actuality Iago himself is the one suffering from jealously. Still, the words themselves ring true for all of mankind: 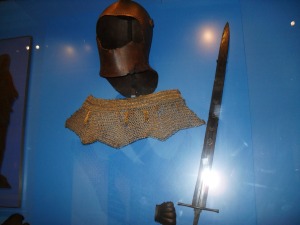 I took this picture at the British Museum. I can’t remember its significance, but it reminds me of Othello!

Jealously is a destroyer—which proves true later on in the play. And it’s not just jealously in the romantic sense. It is perhaps one of the most dangerous and useless emotions in the world.

Yesterday, I read a post by one of my favorite bloggers, Abrielle Valencia, entitled “Do You, Not Them.” Abrielle talked about how hazardous it is to compare ourselves to other people. Far too many of us put others on a pedestal while simultaneously criticizing ourselves. This, in essence, is the work of jealously.

It’s like Shakespeare said, it feeds on us. We become figurative meat to this life-sucking emotion.

It’s true now and it was true then. Again, Shakespeare manages to show us how repetitive the human experience has been. A thought that, in my opinion, is both comforting and disconcerting at the same time.

There’s a moral here. See if you can find it. Shakespeare did.

Old School Sundays: Shakespeare’s “Much Ado About Nothing”

I mentioned that my purpose in dedicating the next several Old School Sunday posts to the Bard is to enlighten my readers about the ubiquity of Shakespeare’s words–even in our own day and age.

Last week I was able to tie a line from King Lear to Hurricane Sandy. This week, I feel strongly compelled to link Shakespeare’s wisdom to the tragedy (though I hardly think the word ‘tragedy’ does the situation justice) that occurred at Sandy Hook Elementary School in Newtown, Connecticut.

As I scoured through my “Bard Books” I came across a passage from Much Ado About Nothing, and while I understand that this play is one of Shakespeare’s comedies, I think the poignant line will speak for itself:

“Men/Can council and speak to that grief/Which they themselves not feel; but tasting it,/Their council turns to passion” (5.1 20-3).

I’ve been witness to several media stories of mass shootings in my day (I was a high school student when the Columbine incident occurred, making the notion of something like that happening very real), and though ALL of these occurrences are beyond horrific, I simply  haven’t been able to separate myself from this one.

And I don’t think I’m alone.

May all the victims, families, and residents of Newtown find peace.